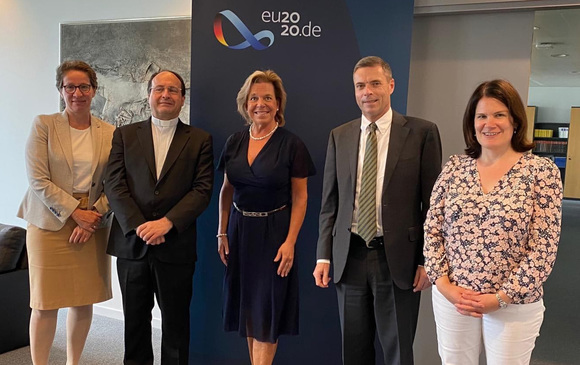 The delegation called the new EU Presidency to renew the commitment towards the European project and its common values in order to make Europe fairer, more equitable and sustainable.

During the meeting, COMECE and CEC presented a joint contribution featuring EU Churches’ thematic reflections, proposals and policy recommendations addressing, also in the context of the current COVID-19 pandemic, the programme of the German EU Presidency “Together for Europe’s Recovery”.

The occasion was an opportunity to highlight the need for “the EU and its Member States, together with Churches and religious communities as well as civil society stakeholders, to collaborate in order to make Europe not only stronger but more innovative, just and sustainable.”

“As Churches – reads the joint statement presented by the EU Churches – we are committed to build bridges of peace and hospitality and promote a comprehensive vision of the common good, pursuing a humane, social and sustainable Europe at peace with itself and its neighbours, in which human rights and solidarity prevail.”

The meeting was a first preparatory step. COMECE and CEC will continue engaging with the new EU Presidency leading up to the high level meeting with Mr. Michael Roth, Minister of State for Europe at the German Federal Foreign Office, to be held in Berlin on Tuesday, 27 October 2020.

Meetings with respective EU Council Presidencies are part of a long-standing tradition supported by Article 17 of the Treaty on the Functioning of the EU (TFEU), which foresees an open, transparent and regular dialogue between the EU institutions and the Churches.