Pope Francis and Cardinal Pietro Parolin are saluted by a Swiss guard as they leave at the end of the afternoon session of the Synod of bishops, at the Vatican, Monday, Oct. 5, 2015. Pope Francis told a contentious gathering of the world’s bishops on family issues to put aside their personal prejudices and have the courage and humility to be guided by the “surprises” of God. (Credit: AP Photo/Alessandra Tarantino)

On the occasion of the 40th anniversary since the establishment of the Commission of the Bishops’ Conferences of the European Union (COMECE), Pope Francis returns to reflect on Europe once more in a letter addressed to H. Em. Pietro Parolin, Secretary of State of His Holiness, who will be participating in the Autumn Assembly of the Bishops of the European Union to start today, Wednesday 28 October 2020.

H. Em. Cardinal Jean-Claude Hollerich SJ, President of COMECE, welcomes the words of Pope Francis and considers them “an encouragement to keep working in dialogue with the EU institutions to build a better world reflecting the dreams of peace and Common Good”. 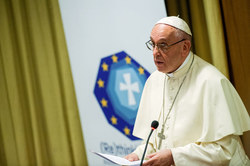 October 28, 2017 : Pope Francis attends to the dialogue (Re) Thinking Europe A Christian contribution to the future of Project Europe, at new synod hall in the Vatican. (Credit: M. Migliorato)

In light of this new comprehensive message on Europe, COMECE Bishop Delegates will exchange on some of EU’s most pressuring challenges mentioned by the Holy Father, including the care for the most vulnerable members of our societies through just social and economic policies, migration and asylum policies and sustainable human development.

The COMECE Assembly will also discuss the contribution of the Catholic Church for a speedy and fair recovery from the Covid-19 pandemic through ecological, social and contributive justice.

Another crucial point in the agenda of the event will be the role of the Church in the EU and the implementation ofArticle 17 of the Treaty on the Functioning of the European Union (TFEU), also in the context of Pope Francis’ call for“a healthy secularism, where God and Caesar remain distinct but not opposed, […] where believers are free to profess their faith in public and to put forward their own point of view in society”.

Due to the sanitary measures recently adopted by the authorities of the Brussels Region, the Mass for Europe has been cancelled. The dialogue session with Mr Margaritis Schinas, Vice-President of the European Commission, has also been removed from the programme of the Assembly. The Bishops of the EU wish him a prompt recovery from Covid-19.

The COMECE Assembly will take place exclusively in a digital format and Chatham House Rules will be applied. Journalists and media operators interested in covering the event are invited to contact the COMECE Communication Officer.