The European Parliament adopted on 15 January 2019 the resolution on the EU guidelines and the mandate of the EU Special Envoy on Freedom of Religion outside the European Union. COMECE welcomes the adoption of this resolution as it enhances the community dimension of the fundamental right to religious freedom, including the recognition of legal personality to communities in the framework of International Law (Art. 18 ICCPR). 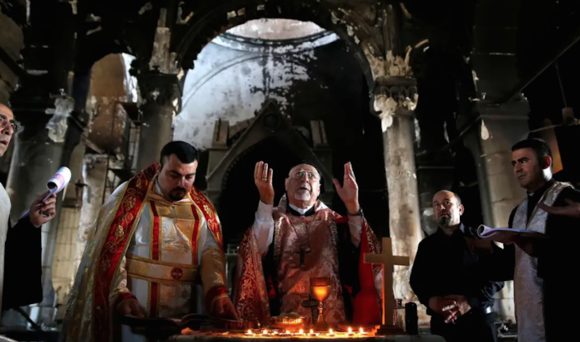 Iraqi priests hold the first Sunday mass at the Grand Immaculate Church since it was recaptured from Islamic State in Qaraqosh, near Mosul, Iraq. (Credit: Ahmed Jadallah, Reuters)

COMECE also considers positively the resolution’s support in the fight against discrimination on grounds of religion, and its recognition of religious freedom defenders as Human rights’ defenders.

As recommended by COMECE at the European Parliament meeting on Freedom of Religion (FoRB) organised on 5 November 2018 by MEP Andrzej Grzyb (EPP), the resolution declares religious illiteracy as one of the factors fueling bias and stereotypes, thus as an issue to be tackled.

The resolution boosts the position of the EU Special Envoy by, among others things, proposing a multi-year term subject to annual review and a development of its working networks within all relevant EU institutions. However, this position hasn’t been upgraded into a EU Special Representative.

COMECE was actively involved in the development of the EU guidelines on freedom of religion adopted in 2013, and, in dialogue with EU institutions, has been working over the last years for the creation of a robust mechanism that could contribute to the improvement of FoRB outside the EU.

COMECE calls the EU to intensify its work in the protection and promotion of Freedom of Religion in third countries, and to fully implement its guidelines on freedom of religion in order to protect religious minorities, to fight against blasphemy and anti-conversional laws, and to combat hate, intolerance and discrimination on grounds of religion.