119 millions Europeans, almost a quarter of the European population, are at risk of poverty and social exclusion. The plight of Europe’s poor was the main topic of the plenary session of the Bishops of COMECE on 26-28 October in Brussels. 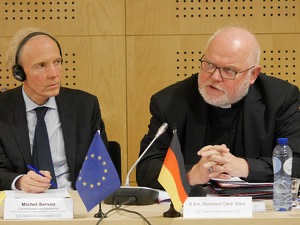 During this meeting, the bishops representing the Catholic Church in the 28 EU member states dialogued with Caritas Europe, the humanitarian arm of the Church, with representatives of the European Commission and local authorities. In particular, they noted of the willingness of the European Commission to move forward and strengthen dialogue on this and EU policy matters with the Church.

After their deliberations, the COMECE Bishops worked on a forthcoming position paper which will include concrete proposals and which places the dignity of the human person at the centre of the political measures to fight against poverty.

The bishops have also visited five Catholic organisations in Brussels, working with the poor (Poverello, La Viale Europe, Nativitas, L’Arche and the Emmaus Community). They spent an evening with volunteers and they listened and exchanged with the people cared for by these organisations.

Analysing the negative perception expressed by the citizens of many member states towards the EU, the COMECE Bishops recalled that it is essential for EU institutions to be truly at the service of the people of Europe, particularly of the most vulnerable. According to Archbishop Jean-Claude Hollerich of Luxembourg, “Europe must again embody a community of solidarity: the very survival of the European project depends on it.” For Archbishop Jean-Pierre Grallet of Strasbourg, “the Church has a capital to generate solidarity, that must be shared with Europe”.

On the issue of migration and asylum to the EU, the COMECE bishops renewed their appeal to a comprehensive European asylum system (Dublin IV) supported by all Member States.