During the COMECE-organised interreligious conference “Shaping the Future of Work” held at the European Economic and Social Committee (EESC) on 27 November, Mgr. Antoine Hérouard, President of the COMECE Social Affairs Commission, officially presented the reflection on the changes in the labour world, encouraging the EU to shape the digital and ecological transformations 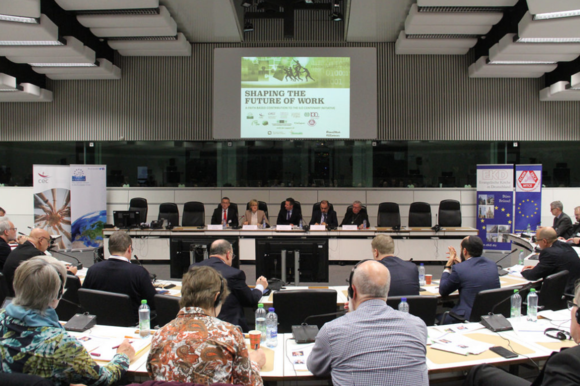 Result of a one-year long process of consultation and dialogue started in November 2017 with representatives of the European institutions and Catholic-inspired organisations and representatives of young European Christian workers movements, the COMECE document suggests 17 policy recommendations that range from the promotion of international labour standards and the social economy to special provisions on tax justice and workers in transition.

Quoting the reflection paper, Mgr. Hérouard identified the challenges in the current shift and called the EU and its Member States to take the ecological and digital transition as an opportunity and to shape both trends towards a common European vision of a decent, sustainable and participative world of work for all.

During the conference, Mgr. Jean-Claude Hollerich SJ, President of COMECE, highlighted the role of work as an integral part of human identity and instrument to care for Creation and stated that “religions are called to remind Europe that our society is composed by humans persons, not by statistics”.

The conference was co-organised by the International Labour Organisation (ILO), the European Economic and Soclal Committee (EESC), COMECE and its faith-based partners as a contribute to the recently launched ILO centenary initiative on the future of work.

The event gathered more than 200 persons from the Christian, Jewish and Muslim faiths with the participation of Mairead McGuinness, First Vice-President of the European Parliament, Luca Jahier, President of the European Economic and Social Committee, Heinz Koller, ILO Regional Director for Europe and Central Asia and MEPs Claude Rolin (EPP) and Patrizia Toia (S&D).