Brother Olivier Poquillon OP commences his work as General Secretary of the Commission of the Bishops’ Conferences of the EU (COMECE) this Thursday, 1 September. 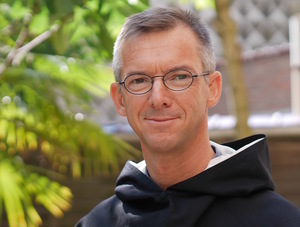 Brother Olivier Poquillon OP was born in Paris in 1966. After studies in international law, he entered the novitiate of the Dominicans in 1994 and was ordained priest in 2001.

Among other assignments, he served as an expert of the Holy See to the Council of Europe and as a military chaplain in the Balkans, Africa and the Middle East. He also chaired the Dominican Order’s Francophone Commission for Justice and Peace.

After teaching at the University of Mosul (Iraq), he was the Permanent Delegate of the Order to the United Nations from 2008 to 2013. Since then he has been the Prior of the Dominican convent in Strasbourg.

Brother Olivier Poquillon arrived in Brussels where he becomes the head of the Secretariat of COMECE, a team responsible for conducting dialogue between the Bishops of the Catholic Church in Europe and the European institutions.

Read his interview in the September issue of EuropeInfos.