Archbishop Jean-Claude Hollerich SJ, President of COMECE, called on EU politicians to promote family-friendly policies during the FAFCE-organised conference “The Family: ecosystem for cultural life in Europe” held at the European Parliament on 6 November 2018. 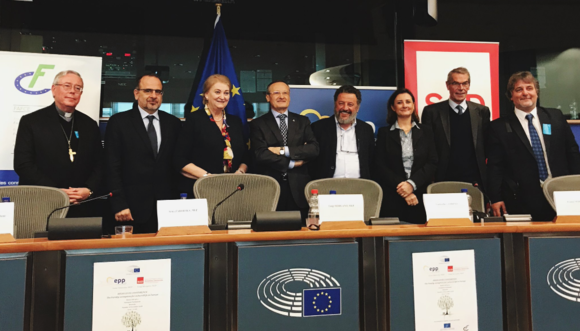 “The family is a place of trust and a source of solidarity – stated Mgr. Hollerich SJ. It is the environment where we are growing up, discovering our strengths and weaknesses for the first time”.

Also inspired by his recent participation in the Synod on young people, the COMECE President highlighted the need to listen to youth’s concerns about social-economical aspects – in particular unemployment – refraining many young people from forming a family. “Politicians – he said – must respond to the fears of young people” and promote an inclusive Europe capable of fully developing persons, families and communities.

The event was organised by the Federation of Catholic Family Associations in Europe (FAFCE) with the support of COMECE, and was hosted at the European Parliament by MEPs Anna Zaborska (PPE) and Luigi Morgano (S&D).

The event included contribution from Gabriella Gambino (Undersecretary of the Dicastery for Laity, Family and Life), Luca Jahier (President of the European Economic and Social Committee), fr. Olivier Poquillon OP (General Secretary of COMECE), and Antoine Renard, (President of FAFCE).