“Converting Hagia Sophia into a mosque distances Turkey from Europe and it is a blow to the Orthodox Church and to interreligious dialogue”, stated Fr. Manuel Barrios Prieto, General Secretary of COMECE, on Friday 10 July 2020 commenting the decision of Turkey’s highest administrative court, the Council of State, to allow the change in status of World Heritage Monument Hagia Sophia from a museum to a Muslim temple. 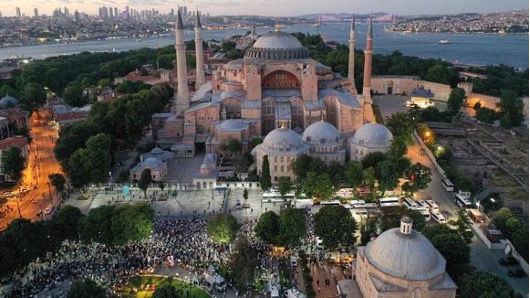 Emphasising the strong symbolic, historical and universal value of Hagia Sophia, Josep Borrell, EU External Action High Representative, stated that President Recep Tayyip Erdogan’s decision to place the monument under the management of the Religious Affairs Presidency, “is regrettable”, and invited the country – a founding member of the Alliance of Civilisations – “to promote inter-religious and inter-cultural dialogue and to foster of tolerance and co-existence”.

In a letter to Turkey’s President, also the World Council of Churches, which counts 350 churches as members, has called Ankara to reverse his decision. And Pope Francis on Sunday said: “I think of Hagia Sophia and I am very saddened”.

The General Secretary of COMECE, Fr. Manuel Barrios Prieto, stated that the decision “is a blow to interreligious dialogue”, a field where, according to a 2019 European Commission report, Turkey has “a serious problem”, in particular in relation to hate speech and threats directed against national, ethnic and religions minorities.

The EU Commission report states that hate speech and anti-Semitic rhetoric in the media and by public officials continues and that, despite “discussions between the Government and representatives of minorities have continued, attacks or acts of vandalism on minority worship places continued and need to be investigated”. The document also highlights that “full respect for and protection of language, religion, culture and fundamental rights in accordance with European standards have yet to be fully achieved”. This includes also the issue of property rights of non-Muslim minorities and “the need for a revision of legislation covering all issues regarding property rights is pending”.

“As the Venice Commission underlined in 2010 – reads the report – Turkey should continue the reform process and introduce legislation which makes it possible for all non-Muslim religious communities as such to acquire legal personality”.

In the context of the recent decision on the status of the 1,500-year-old byzantine building, the issue of legal personality was denounced also by the Turkish Bishops’ Conference, which, in a statement sent to the Catholic News Service, stated that “although we would wish Hagia Sophia to retain its character as a museum, we are a church deprived of juridical status, so we cannot give any advice on this country’s internal questions”.

The UNESCO-listed Hagia Sophia was completed in 537AD by the Byzantine emperor Justinian, and for centuries served as one of the world’s most important centres of Christianity. The cathedral was converted into an imperial mosque about 550 years ago after the Ottoman conquest of Constantinople, and in 1934 became a museum on the orders of Mustafa Kemal Atatürk, the founder of the Turkish Republic.