EU Heads of State and political representatives met with their counterparts from the six Eastern European countries in Brussels to review their partnership. They pledged to strengthen cooperation and to engage in a comprehensive and forward-looking dialogue. 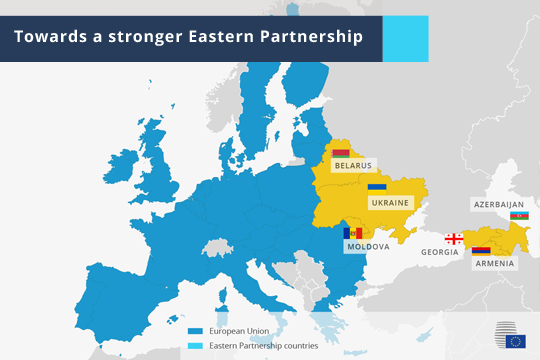 The participants of the 5th Eastern Partnership Summit reaffirmed “the importance of inclusive engagement of all parts of society” as key to address common challenges to human security, peace and sustainable development.

COMECE welcomes this emphasis on people-to-people contacts and, as stated by Pope Francis during (Re)Thinking Europe, believes that Churches and religious actors should be fully included in these cross-cutting and multi-level dialogue processes, “especially where [the dialogue] is threatened and where conflict seems to prevail”.

The Summit participants also highlighted the need to strengthen “resilience” in the EU and the six Eastern partnership countries (Armenia, Azerbaijan, Belarus, Georgia, Moldova and Ukraine). According to COMECE, this should encompass efforts to empower especially young people, families and local communities to take active part at all levels of economic, social and political life.

Some participants expressed disappointment over the lack of a clear and ambitious long-term vision, since the Summit limited itself to define concrete projects to be achieved by 2020 in areas such as economy, good governance & rule of law, connectivity and mobility.

COMECE believes that only a credible and long-standing engagement with Eastern neighbouring countries and their citizens – in adequate recognition of the diversity of their needs and aspirations – can lead to lasting prosperity and peace in Europe.

COMECE will continue to accompany the developments in the Eastern partnership