(Re)Thinking Europe Dialogue gathered in the Vatican City around 350 high-level Church and EU political leaders. Between 27-29 October, participants engaged each other in a frank and open dialogue, contributing to a constructive reflection on the fundamental challenges facing the European project. 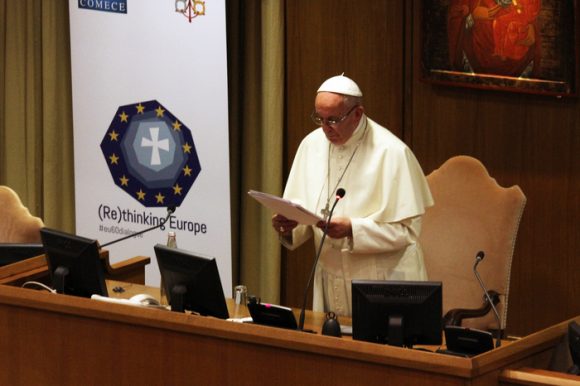 That phase of (Re)Thinking Europe is over but another one begins. As Pope Francis stated during the final ceremony, «Christians are called to promote political dialogue […], to restore dignity to politics and to view politics as a lofty service to the common good».

The follow-up of the Dialogue on Europe is in your hands! It is now up to you to prolong this debate in your countries and institutions involving citizens at all levels of responsibility.

COMECE would be delighted to hear about your initiatives and is at your disposal for possible partnerships.

In order to facilitate your access to the ideas and the proposals that arose during our debates, please find below the links to the public speeches delivered during the Dialogue, including the one of the Pope Francis, and all the material produced by COMECE and its partners and by the media.