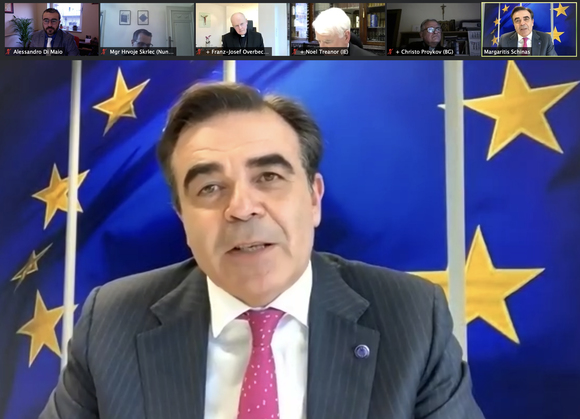 Bishops of EU Episcopates held their second online assembly since the beginning of the current pandemic in March 2020. In dialogue with Margaritis Schinas, Vice President of the European Commission, the Bishops exchanged on some of the most pressing topics on the EU agenda, highlighting the need to work together in facing this historic period marked by the ongoing Covid-19 and climate crisis.

Together, they discussed the current status of the recovery process in the EU and its Member States. In this context, the Assembly emphasized the importance of people-centred and value-based EU policies to protect the poor and the most vulnerable, especially in light of worsening socio-economic conditions deriving from the pandemic.

Vice President Schinas – who is also the Commissioner responsible for Article 17 TFEU – acknowledged the commitment of the Catholic Church to promote the European project and conveyed willingness to move the EU-Churches dialogue towards policy-based exchanges.

The participation of the EU Commissioner was also an occasion to exchange on the EU Pact on Migration and Asylum, proposed in September 2020 by the European Commission. While recognizing the efforts to set out a new and comprehensive framework aimed to create a fair and predictable migration management mechanism, the EU Bishops urged all negotiating actors to promote a welcoming context as well as a fair and just approach to those in need.

“We have to work to ensure the full respect of the individual right to apply for asylum for anyone reaching the EU territory, without pushbacks at our borders,” the COMECE Assembly stated. Climate change and its ecological impact in third countries are also provoking large influx of migrants to the EU. The EU Green Deal– the Bishops stated – would be beneficial not only for the EU, but also for peoples in third countries who suffer the effects of climate change in their daily lives.”

During the Assembly, Bishops also analysed the current trends on Freedom of Religion across the EU, expressing their concerns for the rise of religious illiteracy, which can often lead to negative perceptions of religion.

In discussing recent restrictions to freedom of religion – e.g., Covid-19 measures, ritual slaughter of animals, religious symbols at the workplace – Bishops also underlined the importance of a dialogical approach to public authorities, while avoiding self-censorship and fostering interreligious initiatives to promote this Fundamental Right.

The dialogue with Commissioner Schinas was held in the framework of Article 17 of the Treaty on the Functioning of the European Union (TFEU), which establishes an “open, transparent and regular dialogue” between Churches and EU institutions.