“The Church will be in the frontline during the long and difficult process of recovery from the effects of the Covid-19 pandemic”, stated Cardinal Parolin addressing the Bishops of the European Union at the COMECE Autumn Assembly held on 28-29 October 2020. Cardinal Hollerich on the EU: “a unifying presence of coordination and support for the Member States, but work must continue”.

In the context of the 40th anniversary of the Commission of the Bishops’ Conferences of the European Union (COMECE), the Assembly of EU Bishops, chaired by H. Em. Card. Jean-Claude Hollerich SJ, welcomed H. Em. Pietro Parolin, Secretary of State of His Holiness Pope Francis, to exchange on some of EU’s most pressing challenges mentioned by the Holy Father in his recent comprehensive message on Europe.

Among the topics discussed were the role of the Catholic Church in the EU for a just, fair and ecological recovery from the Covid-19 pandemic, and for the promotion of the Common Good through person-centred policies, in particular in the fields of sustainable human development, migration and environment.

Cardinal Parolin highlighted that the Catholic Church has closely accompanied the European integration process since its beginning and that “the establishment of COMECE in 1980 was a tangible sign of the importance attributed by the Holy See to the activities promoted by the European institutions”.

In light of Pope Francis’ encouragement to the EU to be “healthy secular”, the Secretary of State recalled that the Church, while respecting the autonomy of political life, does not restrict her mission to the private sphere. “On the contrary – quoting the Holy Father’s Encyclical Letter ‘Fratelli tutti’ – she cannot and must not remain on the sidelines in the building of a better world”.

While calling on all of us, including the EU institutions, to “rediscover the path of fraternity that inspired and guided the founders of modern Europe”, the Cardinal assured that the Church would be in the frontline of the long and arduous recovery process from the effects of the Covid-19 pandemic. “This is an occasion to build a fairer and more solidary Europe that shares scientific research and investments for the production of vaccines and the care for the most vulnerable”, he said.

In their exchange, the Bishops and the Secretary of State also referred to the Conference on the Future of Europe, as “a significant occasion to rethink the European identity and its values, as well as to reduce the distance between the EU institutions and the citizens”.

The Cardinal stressed the importance for the Catholic Church to participate in such conference as partner in the context of the open, transparent and regular EU-Churches dialogue mentioned by the Article 17 TFEU.

The Assembly of COMECE was also an opportunity to assess various EU initiatives. According to the Bishops, the Next Generation EU and the Green Deal seem to be going in the right direction, promoting solidarity among the Member States and an ecological conversion that could benefit Europe and the entire world.

Caution was expressed with regard to the new EU Pact on Migration and Asylum, which “marks a step ahead, but also raises many doubts”. Cardinal Parolin supported the idea of reviewing the Dublin Regulation towards policies that welcome, protect, promote and integrate migrants, refugees and asylum seekers.

To put an end to the demographic winter characterising Europe since various decades, the Bishop Delegates highlighted the need for policies specifically supporting the family, “the basic texture of our society”.

Regarding the ongoing digital transformation of our societies, they expressed the will to be vigilant and ensure that it follows the integral development of each person and of all peoples, not at the expenses of human dignity.

After welcoming Pope Francis’ message on Europe “as an encouragement to keep working with the EU institutions”, the President of COMECE, H. Em. Card. Jean-Claude Hollerich SJ, expressed appreciation for the participation and contribution of Cardinal Parolin.
“It confirms the Holy See’s strong appreciation for the mission of dialogue with the European Union carried out by COMECE” – he stated. 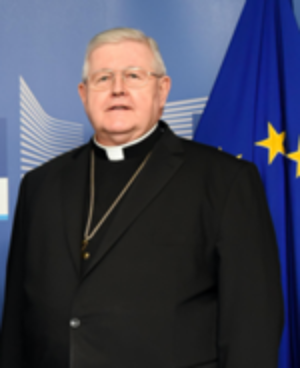 In the context of the current pandemic, the Cardinal Hollerich recognised to the EU “a unifying presence of coordination and support for the Member States” and, in this framework, announced a message with a strong call for solidarity and hope elaborated by the Presidents of all EU Episcopates to be published in the coming weeks.

Special greetings were offered to H. E. Mgr. Alain Paul Lebeaupin, Apostolic Nuncio to the European Union since 2012, who will soon end his 41-year-long mission at the diplomatic service of the Holy See.

At the end of the Assembly, the Bishops condemned the terrorist attack that occurred on Thursday 29 October 2020 at the Notre-Dame Basilica in Nice. H. E. Mgr. Antoine Hérouard, Bishop Delegate of the French Bishops’ Conference to COMECE, led a prayer for the victims, “people who have been killed only because they wanted to pray to the Lord in a church”.

To comply with the sanitary measures established by the authorities of the Brussels Region, the COMECE Assembly was held exclusively in a digital format.