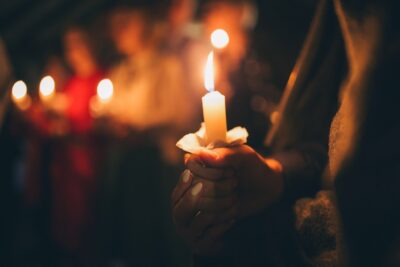 The Commission of the Bishops’ Conferences of the European Union (COMECE) and the Conference of European Churches (CEC) highlight a message of love, hope and peace this Christmas, for Ukraine and beyond. Addressing all churches and people across the continent celebrating Christmas in diverse traditions, COMECE President H. Em. Cardinal Jean-Claude Hollerich SJ and CEC President Rev. Christian Krieger have issued the following message and prayer on Friday 16 December 2022.

A Christmas message for Peace
‘Glory to God in the highest heaven, and on earth peace among those whom he favours!’ (Lk. 2:14)

Christians throughout the world are currently preparing for Christmas, a feast of expectation, love, hope and peace. A feast that is of particular significance to many, may they belong to the Christian faith or not.

For some, however, these are particularly trying times. We think especially of the immense suffering of the people in Ukraine, and those who have been forced to flee from their homes to seek refuge from the brutal military invasion initiated now more than nine months ago. The on-going bloodshed in Ukraine is an open wound of humanity over which dark shadows of war have continued to spread, risking to widen even further.

God’s way is not power and selfishness. On the contrary, it encompasses closeness and compassion. As we read in the Scriptures, God did not manifest Himself to the prophet neither in the powerful wind, nor in the earthquake nor in the fire, but in ‘sheer silence’ (1Kings. 19:11-12), and ‘the Word became flesh and lived among us’ (John. 1:14), as He became a gift to humanity in a small and fragile child Jesus Christ.

In view of the approaching feast of Christmas we, as leaders of our Churches, invite all to pray in a special way for peace in Ukraine. May the Peace of Christ bring calm to the rattling of weapons and comfort to mothers weeping for their children (cf. Mt. 2:18), who had to die because of some selfish interests. May He unite the many families and communities that have been torn apart by hatred and violence. Tormented by cold, hunger and fear, may no one feel abandoned, and may all those fleeing the horrors of war find a warm welcome.

Moved by the terrible human suffering and guided by the virtues of wisdom, integrity and discernment, may the aggressors stop the hostilities so that all parties, with the help of the international community, may open themselves up to dialogue and negotiation of serious proposals towards a just peace.

May the message of Christmas inspire us all to seek reconciliation and peace, so that instead of walls of division and indifference, seeds of mutual respect, solidarity and human fraternity be planted and nourished in our hearts.

Prayer for Peace in Ukraine and Europe during Christmas time

We pray for the people of Ukraine,

for all who are caught up in violence and war,

for all those suffering and afraid,

that you will protect them and strengthen them.

We pray for world leaders,

for wisdom, integrity and compassion,

that you will guide their feet in the way of justice and reconciliation.

We pray for church leaders,

for discernment, determination and courage,

that they may speak words of truth and righteousness.

We pray for the people of Russia,

for all those who plead for an end to violence and conflict,

for all those who are persecuted for speaking against aggression,

that you will console, support and guard them.

We ask for comfort for those who mourn,

hope for those who despair,

forgiveness for those who commit violence,

and mercy for all who suffer.

In the name of Jesus Christ, our Prince of Peace.