On the occasion of the first anniversary since the passing of the late President of the European Parliament David Sassoli, COMECE, together with the Apostolic Nunciature to the EU and the Italian Catholic community in Belgium, celebrated on Wednesday 11 January 2023 a commemorative Holy Mass at the Church of Our Lady of Victories of the Sablon in Brussels. 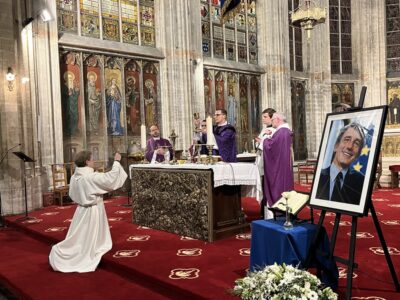 The service was presided by Mgr. Hrvoje Škrlec, Chargé d’Affaires of the Apostolic Nunciature to the EU, and co-celebrated by Fr. Manuel Barrios Prieto, General Secretary of COMECE, and Fr. Claudio Visconti, responsible for the pastoral care of the Italian Catholic community in Brussels.

The homily was offered by H.E. Mgr. Mariano Crociata, First Vice-President of COMECE. “President David Sassoli was inspired by a vision fuelled, nurtured and enlivened by hope, an inner vision that he sought to realise through every step, every gesture and every word, in a constant quest for unity and openness”, stated Mgr. Crociata.

Media
Mgr. Crociata’s homily (EN, FR, IT)
Photos of the mass
Video of the mass