Archbishop Aldo Giordano, the Apostolic Nuncio to the European Union, died on Thursday 2 December 2021 in Leuven, Belgium, after being hospitalized due to COVID-19 infection. COMECE President Cardinal Hollerich: “Mgr. Giordano left a lasting mark on all of us”. 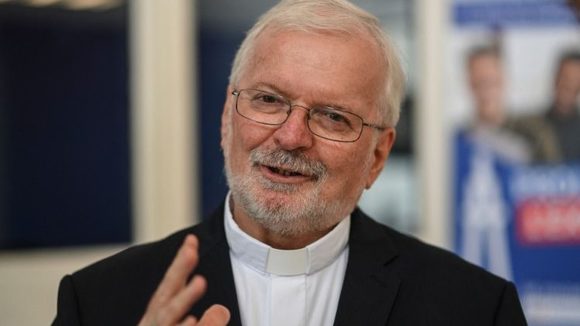 “On learning with sorrow of the death of our brother Monsignor Aldo Giordano, on behalf of the Bishops of the European Union, I wish to express my condolences to his family, to the staff of the Apostolic Nunciature to the EU and to all those who mourn him”, states H. Em. Card. Jean-Claude Hollerich SJ, President of COMECE.

“In the few months since his appointment as Apostolic Nuncio to the European Union, Mgr. Giordano left a lasting mark on all of us. Motivated by his great desire to contribute to the European project from a Catholic perspective, since his arrival in Brussels he dedicated every moment to develop human and diplomatic ties”, continues Card. Hollerich.

“It was a real blessing to meet him and to share with him beautiful moments of coexistence and fraternity, together with the bishops of COMECE”, adds Fr. Manuel Barrios Prieto, General Secretary of COMECE, while recalling the June 2021’s COMECE Standing Committee in Rome and the audience with Pope Francis.

His Excellency Monsignor Giordano was an old friend and partner of COMECE. As a result of his role as General Secretary of Council of European Bishops’ Conferences (CCEE) from 1995 to 2008, and as permanent observer of the Holy See to the Council of Europe from 2008 to 2013, Mgr. Giordano participated in many Plenary Assemblies of COMECE, offering always acute contributions signed by a tangible human touch.

An official message of the Apostolic Nunciature to the EU informs that the funeral of the 67-year-old Vatican diplomat will be held in the Cathedral of Cuneo, Italy. The date is yet to be decided.