An ecumenical delegation with members from the Commission of the Bishops’ Conferences of the European Union (COMECE) and of the Conference of European Churches (CEC) met with Petr Fiala, Prime Minister of the Czech Republic, on Wednesday, 7 December 2022, to discuss efforts of the current EU Presidency in addressing some of the most pressing challenges the EU and its citizens are facing today. 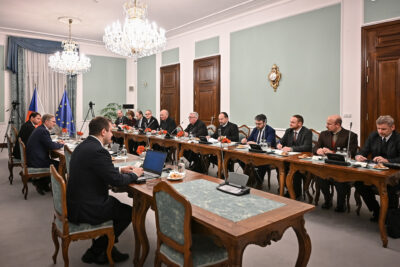 Received at the government’s office in Prague, the COMECE-CEC delegation welcomed the commitment of the EU Presidency to coordinate European actions at a crucial time for Europe and the world, marked by the war in Ukraine, the plight of refugees, as well as increased socio-economic hardship for many persons, families, and companies due to the soaring energy prices and rising cost of living.

Sharing deep concern over Russia’s brutal military aggression against Ukraine, the ecumenical delegation expressed appreciation for the political, humanitarian and financial support of the EU to the war-torn country and its suffering population. 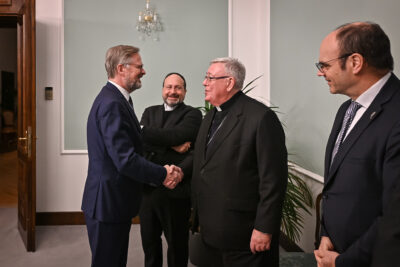 COMECE and CEC articulated their hope for the next EU Presidency to follow up on the Czech government’s efforts to maintain political unity and strengthening social cohesion across Europe in solidarity with those suffering from the war in Ukraine and its wide-ranging consequences.

“If the European Union wants to be a global actor for peace, this is the time to act, undertaking resolute steps towards a dialogue-based sustainable solution to the conflict in full respect of international law and the territorial integrity of Ukraine”, the delegation stated.

The reality shaped by the current war, gave a new momentum to EU enlargement policy. In this respect, the delegation recalled the need for decision makers to answer in a credible way to the European aspirations of Ukraine, along with other countries, notably in the Western Balkans.

COMECE and CEC, together with local Churches, also pleaded for a coordinated EU migration and asylum policy based on the protection of the dignity of every human person at all stages of journeys undertaken by migrants and refugees.

“The generosity in the welcome shown towards refugees from Ukraine should not be an isolated case – the delegation stated – but replicated for migrants and refugees coming from other crises areas and seeking shelter in the EU.”

During the exchange with Prime Minister Fiala, the Churches’ representatives also expressed their serious concern for the most vulnerable members of EU societies, negatively impacted by the COVID-19 pandemic and now exposed to additional socio-economic burden and increased levels of poverty, due to the rising cost of living.

In this context, the delegation also highlighted the importance of tackling the current emergency by ensuring accessible and affordable energy, while promoting a responsible energy consumption and pursuing the long-term objective and a just and sustainable transition. 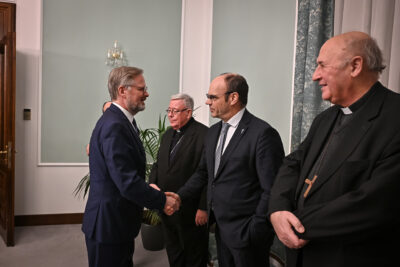 Following the meeting with the Czech Prime Minister, the COMECE-CEC delegation was received by members of the European Affairs Committee of the Czech Parliament, including its Chair Ondrej Benešík. In this exchange, Churches expressed their willingness to join efforts in tackling the spread of disinformation and the misuse of religion, two phenomena that are fuelling polarisation across European societies, as well as posing a grave challenge to EU founding values.

Meetings with EU Council Presidencies are part of a long-standing tradition supported by Article 17 of the Treaty on the Functioning of the European Union (TFEU), which foresees an open, transparent and regular dialogue between the EU and Churches, religious associations or communities.

The meeting with Czech Prime Minister follows on a previous exchange with the Permanent Representative of Czechia to the European Union, Ambassador Edita Hrdá in October 2022.

The COMECE-CEC delegation was composed of: