In a statement released on Tuesday 8 February 2022, the Presidency of the Commission of the Bishops’ Conferences of the European Union (COMECE) expresses its deep concern on President Macron’s proposal of including a supposed right to abortion in the Charter of Fundamental Rights of the European Union. Read the full statement 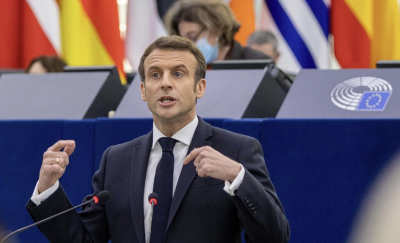 President Macron delivering his speech at the EP in the context of the French EU Presidency. (Credit: Mathieu Cugnot/European Parliament)

Aware of the tragedy and complexity of the situations in which mothers considering an abortion find themselves, the EU Bishops highlight the need to provide the necessary help and assistance to women in distress and to their unborn child.

“Caring for women who are in a difficult or a conflict situation because of their pregnancy is a central part of the diaconal ministry of the Church and must also be a duty exercised by our societies”, reads the statement of the EU Bishops.

From a legal perspective, the members of the COMECE Presidency stress that “there is no recognized right to abortion in European or international law. Attempting to change this – they continue – not only goes against fundamental European beliefs and values, but would be an unjust law, devoid of an ethical foundation and destined to be a cause of perpetual conflict among the citizens of the EU”.

“The proposal of President Macron of inserting this supposed right can in no way be seen as «breathing new life into our basic rights»”, continued the Bishops of the European Union.

Recalling the founding fathers of the European Union, the COMECE Presidency stresses that the European integration should always “foster and promote respect for different identities and avoid ideological impositions”.

The statement of the COMECE Presidency follows President Emmanuel Macron’s speech addressed to the European Parliament on 19 January 2022 in the context of the French Presidency of the Council of the European Union.