“In Bratislava we have been in a real process of synodality. It is by continuing to walk together that we shall see where the spirit of God is leading us”, stated Cardinal Hollerich at the conclusion of the European Catholic Social Days on Sunday 20 March 2022. The next edition will be held in 2027. 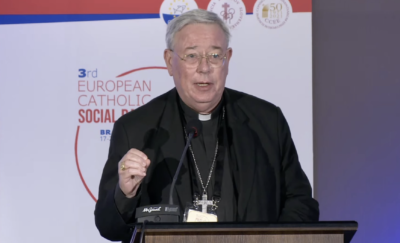 After three days of intense debate on the challenges posed by the demographic, digital and ecological transition processes unfolding in Europe, the third edition of the European Catholic Social Days came to an end in Bratislava.

In his closing remarks, H. Em. Cardinal Jean-Claude Hollerich SJ, President of the Commission of the Bishops’ Conferences of the European Union (COMECE), highlighted the synodal path to which the peoples of Europe are called.

“In Bratislava we have been in a real process of synodality, and it is by continuing to walk together – he stated – that we shall see where the spirit of God is leading us”.

“We could sometimes feel that there are some small differences between Eastern and Western Europe, but these differences never became a wall. On the contrary, they inspired us to be better listeners, to become people of dialogue”, the President of COMECE continued. Watch the video

H.E. Mgrs. Gintaras Grušas, Presidents of the Council of the European Bishops’ Conferences (CCEE), emphasised that the Church must pursue its social commitment while avoiding the risk of becoming an NGO. “The moment that we lose our own identity as Church, […] we have lost everything – even if we manage to save humanity and the planet we now call our home”, he stated.

According to H.E. Mgr. Stanislav Zvolenský, President of the Slovak Bishops’ Conference, these days of dialogue, debate and prayer “went beyond expectations and took us once again beyond the significance of the international meeting”, allowing all participants, including those connected on-line, to be more conscious about the challenges that await us. 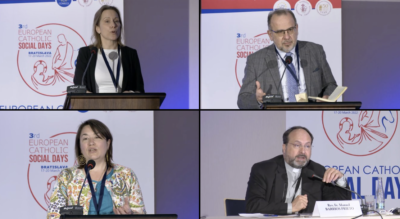 During a morning panel, Maria Nyman and Josianne Gauthier, General Secretaries of Caritas Europa and CIDSE respectively, together with Luca Jahier, Member and Emeritus President of the European Economic and Social Committee, collected ideas, suggestions and best practices emerged during the workshops and debates of the Catholic Social Days. Watch the video

At the end of the event, Fr. Manuel Barrios Prieto, General Secretary of COMECE, informed the public that the fourth edition of the European Catholic Social Days will be held in 2027. “We are very open to receive invitation from Bishops’ Conferences that would like to host this future event”, he stated. 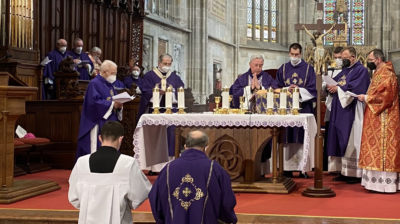 Cardinal Hollerich celebrates Holy Mass at the Saint Martin’s Cathedral in Bratislava on the last day of the European Catholic Social Days.

“Let us not accustom to these images, let us be scandalized by the daily news and let us repent, fast and pray especially for our sisters and brothers in Ukraine. Let us respond to sin by the weapons of God, the weapons of justice and peace”, the Cardinal continued. Read the homily

COMECE thanks all Bishops, speakers and participants, the Secretariat of CCEE and of the Slovak Bishops’ Conference for the friendly collaboration in the successful organisation of this event. We thank the volunteers, the interpreters, and the staff of the Crowne Plaza Hotel of Bratislava.