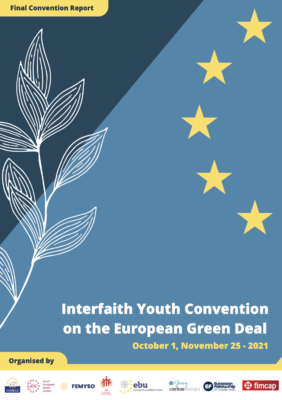 In October and November 2021, over 100 young Europeans, aged 18 to 35, delegated by several faith-based organisations active at the European level, exchanged perspectives and ideas on the European Green Deal, formulating proposals on five thematic areas linked to the EU initiative. Young people who participated in the Interfaith Youth Convention represented the Bahá’í, Buddhist, Christian, Jewish and Muslim communities.

The 2021 November meeting of the Interfaith Youth Convention included a dialogue session (video available here) with the European Commission’s Executive Vice-President and Commissioner for the European Green Deal, Frans Timmermans. Throughout the Convention, young participants had the opportunity to discuss with religious and political leaders on ways to achieve sustainability and environmental protection.

The recommendations included in this Report reflect the commitment of young people of different faiths to a shared European project, the care for our Common Home, and their aspirations for the future of the European Union and its role in the world.

The Interfaith Youth Convention was co-organised by COMECE together with its partners, especially European youth faith-based organisations.