On 4 February 2019 COMECE hosted a dialogue meeting between faith-based actors and policy-makers in the context of the on-going negotiations on the new partnership between the EU and the ACP countries. 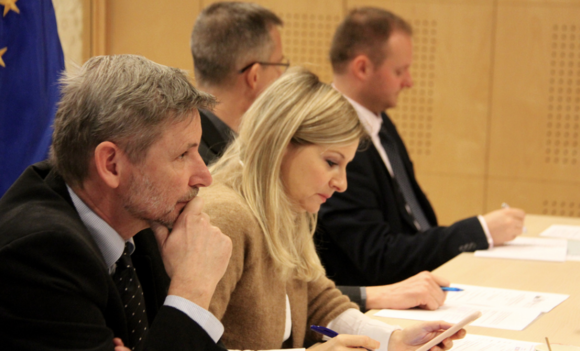 Stakeholders from the European External Action Service, European Commission, European Parliament, as well as faith-based actors from the field, including entrepreneurs and youth representatives, discussed how public authorities in the EU and in African, Caribbean and Pacific (ACP) countries could better serve people’s needs through fair trade and sustainable investment practices.

The event was co-organised with the Conference of European Churches, the Bahá’í International Community and the Quaker Council for European Affairs in view of the renewal of the Cotonou Agreement in 2020 and of the on-going negotiations.

Moving away from a mere donor-recipient relationship, COMECE encouraged efforts towards a fair, comprehensive and responsible EU-ACP partnership, allowing a use of the capital for the benefit of people, especially by empowering the youth, women and families in their local communities. Local capacity-building through education and formation plays a key role in building a fair and just business environment.

Besides promoting inclusive economic processes based on production instead of predation, COMECE stressed that respective EU mechanisms supporting the private sector’s involvement in development processes need to ensure effective market access and compliance with accountability standards by all stakeholders.

The meeting also highlighted the importance to better integrate a transversal multi-stakeholder approach within the EU-ACP framework by allowing various actors – including civil society and religious communities – to actively participate at all stages of decision-making and implementation processes.

Media
Photos of the event