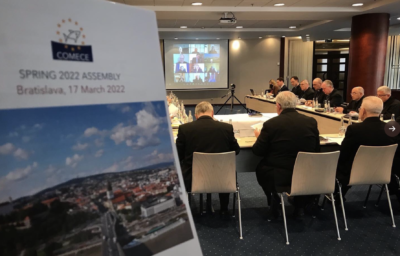 The Bishops of the European Union gathered in Bratislava in the context of the 3rd edition of the European Catholic Social Days, which will take place in the capital city of Slovakia on 17-20 March 2022.

Bishops exchanged on the war currently raging in Ukraine, “a serious threat to peace on the whole European continent and beyond”.

The Bishops delegated by the Episcopates of the EU Member States bordering Ukraine informed the Assembly on actions taken by the local Church, government and society to welcome and integrate refugees fleeing the war from Ukraine. The President of COMECE, H. Em. Cardinal Jean-Claude Hollerich SJ, expressed his deep respect for all countries welcoming refugees, especially Poland and Slovakia. “This sincere solidarity – he stated – reflects the Christian and European values”. 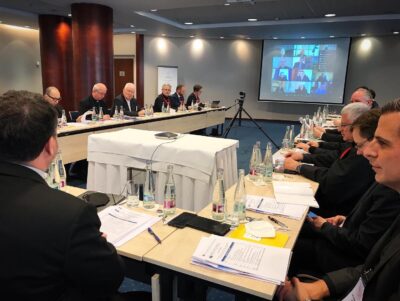 The Assembly was also an occasion to exchange on the most pressuring challenges in European societies, such as demographic transition and family life, technological and digital transition, and ecological transition. These topics will be on the agenda of the 3rd edition of the European Catholic Social Days.

Following the positive experience of the recent youth conventions organised by COMECE, the Assembly approved the establishment of the COMECE Youth Consultative Network, with the aim to represent the voice of young Catholics in the EU Bishops’ Conferences, promote exchange and dialogue among young people, act as a youth interlocutor of the Bishops of COMECE, and intensify the exchange of good practices, initiatives and projects carried out by the Bishops’ Conferences in the area of EU youth policies.