Pope Francis addressed the participants of the 3rd edition of the European Catholic Social Days on Friday 18 March 2022, thanking Church actors for the “prompt and coordinated response in coming to the aid” of the refugees from Ukraine. Read the message of Pope Francis

On the occasion of the opening session of the 3rd edition of the European Catholic Days held in Bratislava on 17-20 March 2022, the Holy Father addressed the participants of the event with a message focused on the current war and humanitarian crisis in Ukraine.

“The distressing cry for help of our Ukrainian brothers and sisters urges us as a community of believers not only to reflect seriously, but to weep with them and to do something for them; to share the anguish of a people whose identity, history and tradition have been wounded”, reads Pope Francis’ message.

“Once again humanity is threatened by a perverse abuse of power and vested interest, which condemns defenseless people to suffer all forms of brutal violence”, the message continues.

While thanking all those who acted with a “prompt and coordinated response in coming to the aid of the people, guaranteeing them material help, shelter and hospitality”, the Holy Father prayed for a general “commitment to rebuild an architecture of peace at the global level, where the European home, born to guarantee peace after the world wars, plays a primary role”.

The opening session also included the participation of Zuzana Čaputová, President of the Slovak Republic. “All the moral and spiritual 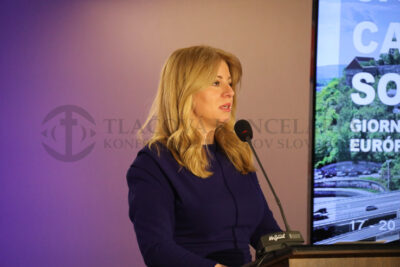 qualities that we are discovering and mobilising in ourselves today – she stated referring to the ongoing war in Ukraine and to the impact of the COVID-19 pandemic to our societies –  will undoubtedly be needed in the future, when we face the challenges that lie ahead. The war has erupted at a moment when our continent is facing a number of serious and interlinked challenges, including the climate crisis, ageing, changes in the labour market and social inequalities”. Read the speech of President Zuzana Čaputová 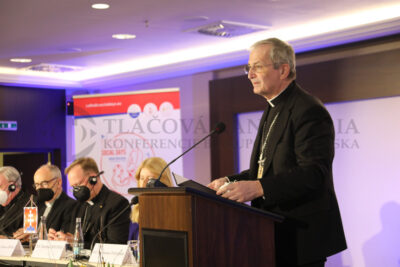 Following the European Catholic Social Days held in Gdansk (2009) and in Madrid (2014), this third edition – entitled “Europe after the pandemic – towards a new beginning” – gathered hundreds of delegates of the Bishops’ Conferences to discuss about the most pressuring socialchallenges in Europe.

This event aims at reflecting upon the demographic, technological and ecological transition processes taking place in European societies. Moreover, as highlighted by H. E. Mgr. Stanislav Zvolenský, President of the Bishops’ Conference of Slovakia, in his opening remarks, “the theme of the war confrontation and its consequences, especially from a social point of view […], has become particularly topical in this regard”. Read the speech of Mgr. Stanislav Zvolenský 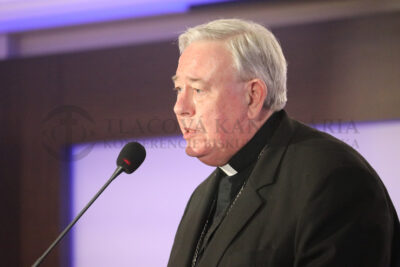 solidarity with our brother and sisters in Ukraine”, welcomed the event as the occasion to “reflect on the importance of solidarity and social justice in Europe” and invited all participants to “rediscover together our vocation to fraternity, and to reflect and debate on the way forward towards a just recovery in Europe, leaving no one behind”. Read the speech of Cardinal Hollerich 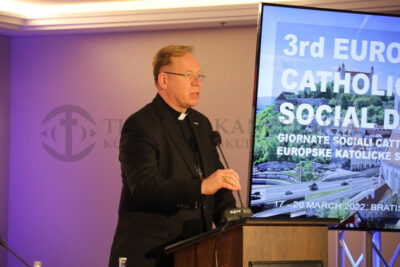 “We embark with the hope of helping one another find a path on which we can assist in the renewal of the Church in Europe and of our European society” –the President of CCEE, H.E. Mgr. Gintaras Grušas, added.

“The challenges before us are great, but our coming together to pray, to analyze the current situation and to look for solutions is at an appropriate moment”, he continued. Read the speech of Mgr. Grušas 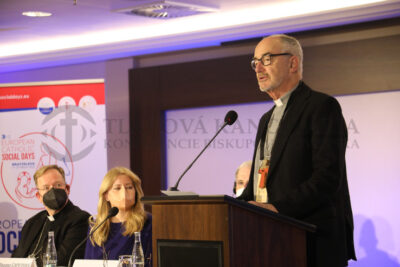 Days following his visit to some of the structures receiving refugees at the Slovakian-Ukrainian border. “[I saw war] in displaced and desperate eyes, in personal and family histories abruptly ended”, he stated.

“How do we, as Christian or non-Christian citizens, as laity or clergy and hierarchy, contribute to peace in Europe? Such an examination of conscience invites us to meditate on the violent history of the 20th century and the first 20 years of the 21st. The vocabulary and thinking of such an examen may be found in ‘Fratelli tutti’”, he continued. Read the speech of Cardinal Czerny

During the first day of the event, participants joined various workshops and reflected and explored the social, ecological and demographic challenges in today’s Europe, including the road to recovery from the impacts of the COVID-19 pandemic. Watch the videos

A powerful ecumenical prayer closed the first day of the third edition of the European Catholic Social Days. The ceremony was celebrated at the Saint Martin’s Cathedral of Bratislava, where participants, including the Slovakian Prime Minister Eduard Heger, prayed for peace in Ukraine and in the world.

Visit the official website of the event to download the programme, speeches, contributions, videos and photos: www.catholicsocialdays.eu