COMECE organised a conference on 31 of January in Brussels on the theme of “Promoting the Christian Heritage of Europe” as a contribution to the European Year of Cultural Heritage 2018. 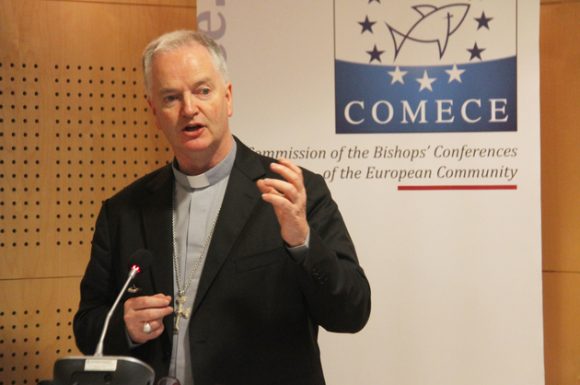 “The Church has a spiritual dimension but it is also a key actor in developing culture – said Fr. Poquillon op, COMECE General Secretary. It is the oldest structure still existing in Europe based on a faith expressing itself in different ways. It is a clear example of unity in diversity, like the EU wishes to be, and exactly like all of you arrived here from every corner of Europe in order to reflect about EU’s cultural diversities”.

He particularly referred to Pope Francis addressing the participants of the (Re)Thinking Europe Dialogue in Rome last October, when he diagnosed that “Europe has a kind of memory deficit” and that “to become once more a solidary community means rediscovering the value of our own past, in order to enrich the present and to pass on a future of hope to future generations.”

In his address, H.E. Mons Paul Tighe, Secretary of the Pontifical Council for Culture, exposed the challenges of developing culture in a context of religious illiteracy, highlighting the risk to lose keys of interpretation of our own culture. He praised the European Year as an opportunity for encounter and invited Catholic bishops in Europe to promote it as a tool for Evangelisation.

Mr. Tibor Navracsics, EU Commissioner in charge of Education, Culture, Youth and Sport, invited Church actors to make more use of EU tools to promote the spiritual element of the European culture. “The European Year of Cultural Heritage – he added – will only be a success if we use this opportunity as an invitation to share and cherish a common past”.

H.E. Mons Alain Lebeaupin, Apostolic Nuncio to the European Union, said that one of the main opportunities offered by the European Year of Cultural Heritage is to explore the diversity of cultures within the European Union by visiting each other and developing common projects.

The conference was also an opportunity to present the projects and initiatives of the Forum for Religious Heritage and to learn about a series of best practises illustrating the promotion of Christian heritage in Europe: a new pilgrimage trail in the footsteps of Saint Columban, mediation efforts of cultural and religious heritage in Chartres Cathedral, community-based restoration of the Saint Martin’s Chapel and the living tradition of the Samogitian Calvary Cross Ways in Lithuania.