Six people were killed in Kinshasa on 21 January during demonstrations against delayed elections and the continuation of President Kabila’s mandate. Other 57 people were injured, and 111 were arrested across the country. According to the United Nations (UN), most of the victims were Catholic faithful who peacefully protested after attending Sunday Masses. 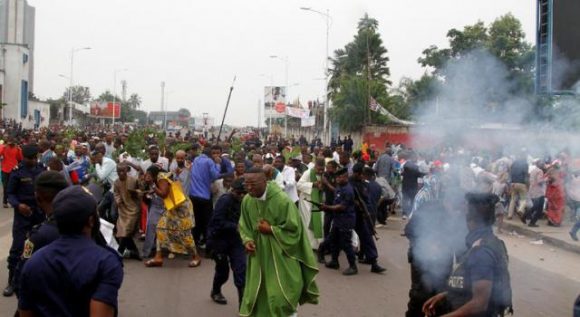 Pope Francis appealed to authorities in the Democratic Republic of Congo (DRC) to do everything in their power to avoid all forms of violence and look for solutions in favor of the common good.

These incidents occurred only days after the European Parliament adopted on 18 January 2018 a resolution highlighting that “the authorities in the DRC have undertaken systematic harassment against civil society organisations and human rights defenders”, including the Catholic Church and the Comité Laic de Coordination (CLC).

As mediator in the political transition process, the Catholic Bishop Conference facilitated the Saint Sylvestre Accord committing the parties to hold new elections. In order to encourage the full implementation of the Accord, religious actors called for peaceful marches on 31 December 2017, violently repressed by security forces, resulting in eight casualties, several others wounded and arrested.

The Apostolic Nunciature counted 134 churches attacked by the armed forces, 5 masses interrupted, 6 priests arrested. Cardinal Monsengwo, Archbishop of Kinshasa, said that “the incidents lead one to believe that the Catholic Church is being targeted deliberately, in order to sabotage her mission of peace and reconciliation.”

In its conclusions adopted on 6 March 2017, the Council of the EU recognized the “moral leadership, impartiality and legitimacy of the Catholic Bishops’ Conference (CENCO) and reiterated its full support for the[ir] mediation role played”.

COMECE expresses solidarity with the Congolese Bishops’ Conference and supports its efforts in advancing the democratic transition process. In this regard, COMECE encourages the EU to:
• pay particular attention to the social and humanitarian consequences of the crisis affecting DRC;
• accompany the Congolese people in their legitimate aspirations for a democratic governance, respectful of fundamental freedoms and ensuring the well-being of all;
• support activities of the Congolese civil society and the religious actors as the main social and peace-building players.