The Bishops of the European Union congratulate Albania and North Macedonia on the opening of EU accession negotiations. Fr. Barrios Prieto: “a credible EU enlargement process is of strategic importance for stability, prosperity and peace on the European continent”. 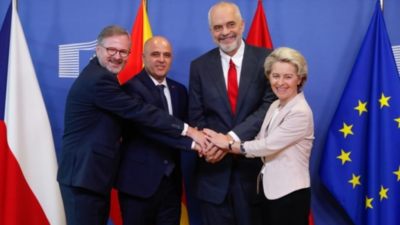 The Commission of the Bishops’ Conferences of the European Union (COMECE) congratulates Albania and North Macedonia on the opening of EU accessions talks officially lauched on Tuesday 19 July 2022 in Brussels in what can be described as a historic moment for the two Western Balkan countries and for the European Union.

Fr. Manuel Barrios Prieto, General Secretary of COMECE, reacted on behalf of the Bishops of the European Union by “warmly congratulating Albania and North Macedonia and their people, who have long awaited this moment with hope and faith”.

“A credible EU enlargement process is of strategic importance for stability, prosperity and peace on the European continent”, the COMECE General Secretary added.

In June 2022, COMECE released a statement prepared by its External Affairs Commission urging the European Council to “renew its efforts for peace in Ukraine and to implement a credible EU enlargement process”, including the opening of accession negotiations with Albania and North Macedonia and granting a candidate status to Ukraine.

In February 2020, COMECE received a delegation from the Albanian Bishops’ Conference, facilitating exchanges with high-level representatives of the EU on the future European path.

In May 2018, a delegation from the International Bishops’ Conference of Saints Cyril and Methodius visited COMECE to draw attention to the importance of embedding the region of the Western Balkans in the EU integration process.