COMECE and CEC Presidents, H.Em. Cardinal Jean-Claude Hollerich SJ and Rev. Christian Krieger, sent a letter addressed to the Presidents of Russia and Ukraine Vladimir Putin and Volodymyr Zelenskyy on Monday 11 April 2022, calling for an Easter ceasefire in Ukraine from midnight on 17 April until midnight on 24 April. Letter to Putin and Zelenskyy | Letter to Patriarch Kirill | Video from the Polish-Ukrainian border 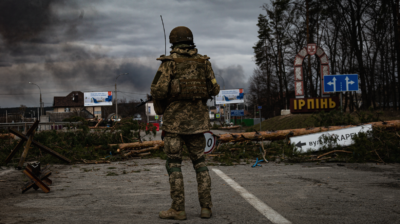 A soldier in Ukraine. (Credit: ShutterStock)

In their letter, the Presidents of the Commission of the Bishops’ Conferences of the European Union (COMECE) and of the Conference of European Churches (CEC) ask for “a general ceasefire so as to give Christians in Russia and Ukraine, sisters and brothers in Christ, the opportunity to celebrate Easter in peace and dignity”.

“Such a truce would also be of benefit to all the citizens of both your countries, giving them a respite from the worrying uncertainty about the lives of their loved ones who are either fighting in the conflicts or affected by them,” reads the COMECE-CEC letter addressed to the Presidents of Russia and Ukraine.

The appeal is made in the context of Easter, when Christians throughout the world remember the passion and death of Jesus Christ and celebrate his resurrection. These Paschal celebrations lie at the heart of the Christian faith and are the high point of the liturgical year.

The call from CEC and COMECE echoes that of Pope Francis on 10 April 2022, when he said, “Put the weapons down! Let an Easter truce start. But not to rearm and resume combat but a truce to reach peace through real negotiations open to some sacrifices for the good of the people.” 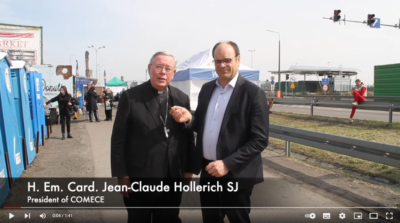 Both CEC and COMECE Presidents also informed H.H. Patriarch Kirill of Moscow and all Russia about their appeal, urging him to support their initiative. “You could demonstrate how much importance you attach to giving Christians in Russia and in Ukraine, sisters and brothers in Christ, the necessary respite to enable them to celebrate Easter in peace and dignity,” reads their joint letter to Patriarch Kirill.

The Presidents of CEC and COMECE are urging Church leaders and communities throughout Europe to join their call.

Since Russian troops entered Ukrainian territories on 24 February, CEC and COMECE have been engaged in prayer and advocating for peace.