Two Bishops of COMECE participated in the High-level religious leaders meeting with the EU. This year it was dedicated to the theme “Migration, Integration, European values: from words to action”. COMECE welcomes the open and constructive dialogue which took place on 29 November at the seat of the EU Commission with the Commission’s First Vice-President Frans Timmermans. 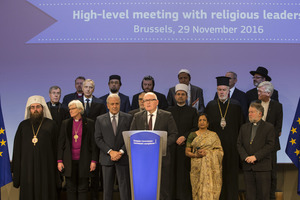 The First Vice-President of COMECE, Mgr Jean Kockerols, outlined the concerns, facts and convictions of the Catholic Church in the migration issue. “This crisis has undermined unity in Europe, and, admittedly, also within the churches in Europe. The migration crisis is challenging Christian communities to position themselves, as citizens and also as believers.”

The auxiliary Bishop of Malines-Bruxelles also underlined the massive efforts accomplished by local churches to welcome refugees and promote a good integration in the long run. Finally, he reaffirmed the conviction of the Church that hospitality is the founding pillar of Christianity. “It is our duty to recall that every refugee has the right to receive a fair and human treatment. The question of a common solution to the refugee crisis is a question that touches directly upon the values and the future of Europe”, he concluded.

Speaking from the experience of Nordic countries, COMECE Vice-President Mgr Czeslaw Kozon recalled the importance of family reunification in the context of migration “as a key issue and also one dealing with fundamental rights, as everybody has a right to found a family and all members of such a family the right to live together.” The Bishop of Copenhagen also insisted on the respect for religious freedom when receiving refugees and immigrants and integrating them in our societies.

This annual meeting takes places under the auspices of Art.17 of the Lisbon Treaty (TFEU).