The General Secretaries of the Bishops’ Conferences of the EU gathered today at COMECE in order to exchange on EU key topics, which are of specific interest of Churches in the European Union, as well as for the around 60% of EU citizens that the Catholic Church gathers. 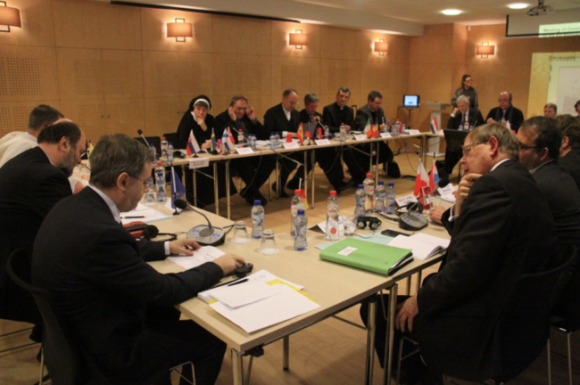 The General Secretaries exchanged on practical and technical questions within the field of competence of COMECE. The General Secretaries were introduced to some of the dossiers followed more recently by COMECE in a constructive dialogue with the European institutions based on Art. 17 TFEU. A broader goal of the meeting was to achieve a better integration of the Bishops’ Conference of the Catholic Church in the EU.

In this context, COMECE advisors presented their work on data protection, transparency policies, family, and ethical aspects of artificial intelligence and robotics, security and defence, external action and development.

The gathering comes three months after (Re)Thinking Europe, the high-level dialogue between Church and EU political leaders organised in the Vatican by COMECE and the Secretariat of State of the Holy See in order to contribute to a constructive reflection on the fundamental challenges facing the EU project.

On that occasion, Pope Francis encouraged all of us to launch new processes of dialogue and collaboration. “Christians are called – stated the Pople – to promote political dialogue, especially where it is threatened and where conflict seems to prevail”.

Today’s meeting will be a milestone for stronger synergies between the Bishops’ Conferences of the EU, and also with COMECE.

Media
Photo Gallery of the Event