H. Em. Cardinal Jean-Claude Hollerich SJ and Rev. Christian Krieger, Presidents of the Commission of the Bishops’ Conferences of the European Union (COMECE) and of the Conference of European Church (CEC) met with the President of the European Parliament Roberta Metsola on Wednesday 29 June 2022 to discuss the final report of the Conference on the Future of Europe (CoFoE), as well the ongoing war in Ukraine and the implementation of the Article 17 Treaty on the Functioning of the EU (TFEU). 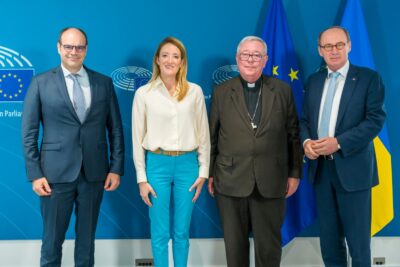 In context of the follow up to the CoFoE, the representatives of European churches expressed their will to support concrete outcomes – as opposed to symbolic ones – and to stand ready to “further contribute to the works of the Conference, especially in the context of empowering the youth and reducing the distance between EU citizens and institutions.”

The meeting also addressed the ongoing Russian war on Ukraine, pointing out the role of the Churches and religious communities in supporting the suffering local population, as well as refugees arriving to the EU countries. In view of the renewed efforts to end the war, the ecumenical delegation stressed that “truth and justice are preconditions for lasting peace in Europe.”

Both Cardinal Hollerich and Rev. Krieger underlined the importance of maintaining constructive dialogue and interaction with EU institutions, in line with Article 17 of the TFEU, which, according to COMECE and CEC, “should be content-based and effectively address key points of priority EU initiatives”. “We are grateful for a very warm welcome and an open exchange with President Metsola, where she listened to us intently,” said CEC President Rev. Krieger. “All in all, it was a meeting that honours the spirit of an open dialogue provided for Churches and faith communities in Article 17 TFEU.”

In this context, the delegation introduced the idea of establishing a ‘Council of European Religions and Religious Leaders’ to enhance the dialogue between faith communities and the EU institutions. President Metsola was invited to open the Council’s first meeting that is envisaged to take place in November 2022.

At the end of the meeting, the President of COMECE expressed the concerns of the Catholic Church for the way the issue of abortion is treated at the EU level. “The attempt to see abortion as a fundamental right, not only goes against the respect of the dignity of every human being, which is one of the pillars of the EU, but it will also gravely endanger the right to freedom of religion, of thought and conscience and the possibility of exercising conscientious objection ,” stated Cardinal Hollerich.

The meeting with the President of the European Parliament was organised in the context of Article 17 TFEU, which foresees an open, transparent and regular dialogue between the EU institutions and Churches and religious associations or communities.

Media
Photos of the meeting